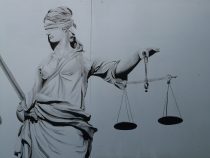 On Wednesday, September 7th, my class 7B went to the criminal court with our teachers Ms. Şeker and Ms. Sockel. First we had to choose between three different procedures: “drug abuse“, “burglary“ and “aggravated assault on purpose“. We decided for number three.
Then we had to pass the security check. The courtroom we went in was the smallest one in the building. In the small room there were three lines of seats and in front of them the judge. He had three people sitting next to him: two lay judges and one woman who typed the statements of the parties into her computer.
The accused shared one bench and their defense attorneys were at their back. On the other side two more persons took a seat: a man and a woman. The woman was an Albanian translator needed by both of the accused. The man wearing a cloak was the prosecutor. We sat in the back on three lines of benches and next to us were two witnesses.
Next, the two accused told about the crime‘s night. According to man one, he had just wanted to talk to man two who had then stabbed him into stomach. In the end of the procedure the judge took a procedural decision and referred the case to a grand jury because he qualified the facts as a potential murder case.
The court procedure began at nine o’clock and ended at noon. The judge was a strict man and the session did not end well for either of the accused.
I think after this court visit the class 7B will avoid any trouble.
It definitely was a lesson to us.

Today we went to the English Theatre. We watched “The Hound of the Baskervilles” by Arthur Conan Doyle. The play was all […]

On April 11th, the class 4B was given the chance to visit the U.S. American Embassy in Vienna and to listen to […]