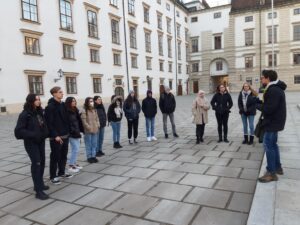 We all know the beautiful, elegant side of Vienna. But did you know there is also a dark side that lies underneath?
On Tuesday, Jan. 11th, we got introduced to it on our ghost tour with our tour guide Stefan and learned about many secrets we had never wished to be true. 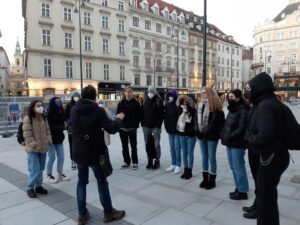 One of the disturbing stories we were told was about the catacombs underneath St Michael’s church. Only rich people had the privilege to get buried down there but at one point there was no more space for the corpses. So, the skulls and the big bones were put into the walls and the small bones were crushed, and – together with pieces of skin – mixed with clay to raise the floor. When you walk there now, be aware there are 1,50m of rotten skin and flesh beneath your feet. 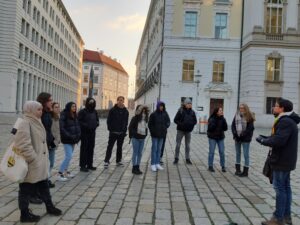 Another shocking story was about an old woman, whose granddaughter was possessed by the devil. That’s what people back then believed because the young girl was trembling badly on a regular basis ever since she had been born. Little did they know that the granddaughter had epileptic seizures. Her frightened father sent her to church where she was held, and a priest performed an exorcism. By that time, her grandmother was accused of having a deal with the devil himself and having sold her granddaughter to him. The old woman was tortured until she confessed every accusation and was burnt at the stake.

When the underground line U3 was built below the Minorite Church, a skeleton was excavated, having been buried facing downwards. Scientists came up with various theories as to why – and here are the two most probable ones: The man in the coffin was not dead yet and moved around in the coffin in an attempt to free himself. The more likely explanation is that the man was accused of being a vampire. To prevent him from coming back, he was buried face down, so if he woke up, he would dig in the wrong direction.
The last story to tell is the one about Elisabeth Báthory, a Hungarian noblewoman. What’s scary about her is that allegedly she killed 600 maids to bath in their blood just to stay young. Fun fact: she is in the Guinness Book of World Records for being the most prolific female murderer.

Our class and several other upper classes had the pleasure to see a renewed version of the play “Hamlet” on 21st December, […] 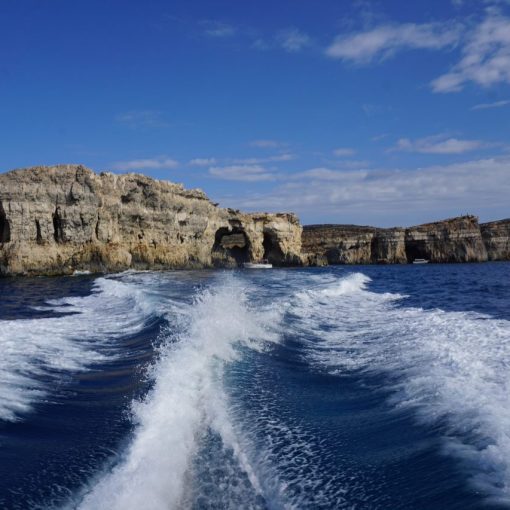 This year we talked about poetry slams in 3A and the students also wrote some poems themselves. We all agreed Leontina’s poem […]